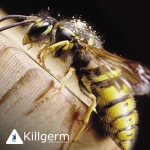 Yellow and black abdomen. Markings will differ according to species Lifecycle

Young Queens overwinter and emerge in the spring to start nest building and lay eggs. Workers (sterile females) emerge during early summer and take over nest building. Queen continues to lay eggs. New queens and males mate in early autumn. Nest dies during winter, including all the males and workers. Only Queens survive to the next year.

Wasps are a problem in food production, storage and consumption areas in the same ways as other flying insects. Wasps also bring an added danger by being armed with venomous stings that are painful to all and very dangerous to a few. Habits

Swarming Does not swarm.

Food preferences
will take insects and sweet foods. Stings readily and repeatedly being social insects some species like the Common and German wasp will form colonies of many thousands of individuals. Nests can be massive and should not to be tackled unprepared.